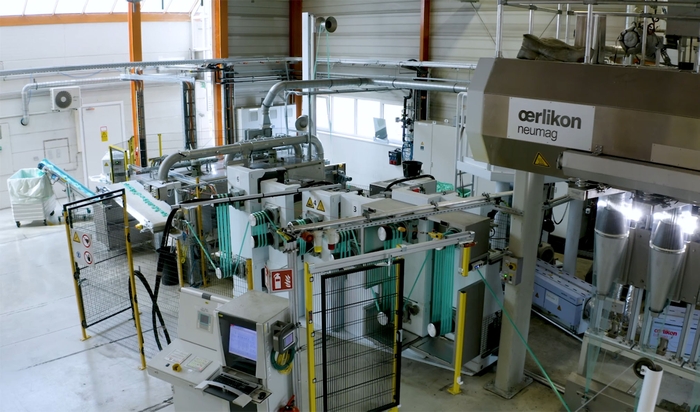 Moormerland/Germany, June 2021 – IFG Asota in Linz/Austria is the R&D centre of the Industrial Fibres Group (IFG), a leading European manufacturer of melt-spun staple fibres of PP, PE and PA. Due to the different in-house and customer-oriented challenges in the development of specialities, increasingly from biopolymers such as PLA (polylactide) and PBS (polybutylene succinate), product changes are frequent on the semi-industrial pilot plant installed there. Thorough cleaning of the two extruders keeps the time needed for this and the amount of material required to a minimum and also contributes considerably to the high quality of the produced fibres. Dreyclean® LT high-performance cleaning granulates from Dreychem have proved to be an optimum choice for this.

Andreas Weinberger, R&D Manager at IFG Asota: “With the fibre diameters down to less than 20 µm, even the tiniest contaminants in the melt can cause production problems. Especially when the machine has been idle for a certain time due to capacity utilisation aspects, rinsing with the usual polymer is not enough to reliably remove all the deposits and agglomerates. This applies all the more to biopolymers, which rapidly tend to thermal degradation at elevated temperatures. Here, the cleaning granulates from Dreychem have proved to be so efficient that, since we started using them, we have had significantly fewer problems such as fibre breakages. Apart from that, our experience shows that, following their use, processing temperatures in the extruder of up to 20 °C lower are sufficient for achieving the same throughput. This improves the quality of the biobased fibres and lowers the energy consumption.”

Another particular benefit of using Dreyclean LT, says Weinberger, is the much lower material loss compared with rinsing with the original material: “Biobased plastics such as PLA are very much more expensive than conventional thermoplastics used for melt spinning. This, plus our overall shorter running times per batch, make the material losses until a stable process is reached a significant economic factor. With Dreyclean, we have been able to cut this start-up time by more than half.”

Kerstin Brunken, Managing Director of Dreychem, adds: “With Dreyclean LT, we have developed a mechanically acting cleaning granulate that is able, even without any abrasive ingredients in the recipe, to eliminate particularly stubborn incrustations and other deposits very effectively indeed. The standard range of application extends from polyolefins through PET to TPE and TPU at processing temperatures of 180 to 320 °C, in extrusion and also when cleaning injection moulding machines and tools. We are delighted that the product’s application at IFG Asota now also proves the beneficial effect when processing biopolymers.”

International Fibres Group services a worldwide market and offers high-grade fibres for a diverse range of industries. In the development of new products and technologies, the focus is on sustainability, recycling, the optimisation of biobased products and improving the product performance characteristics. Part of the core strategy is the development of an industry-leading range of more sustainable staple fibre solutions of biobased polymers including PLA and PBS at the same high performance level as conventional products of polypropylene, polyamide and polyethylene.
IFG Asota works on the development of innovative thermoplastic fibres with different colours and titres and uses for this a variety of application-specific additives to optimise performance in areas such as filtration, fibre reinforcement and in the building trade. The range of industrially compostable staple fibres of PLA derived from this is used for packaging, thermal seal paper applications, special geotextiles, as erosion protection and for filter applications. Ongoing projects deal among other things with the market availability of biodegradable fibres of PBS.

Dreychem GmbH, Moormerland, (www.dreychem.com) has been operating since 2008 as part of the Dreyplas group of companies (www.dreyplas.com) as a distributor of cost-efficient cleaning granulates with a mechanical, chemical or combined effect.

Designed by Move IT - Lösungen.